According to the latest data released by Alphaliner, by the end of May this year, the global capacity of idle container ships had exceeded 2.72 million TEU, the highest in history, accounting for 11.6% of the current global total capacity. 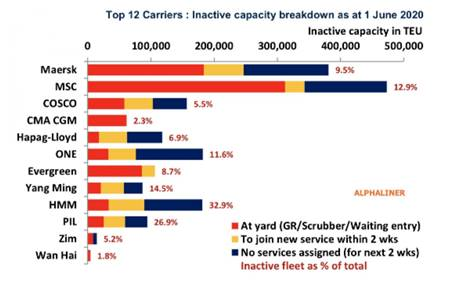 Red : At the shipyard.

Yellow : New routes can be put into operation within two weeks.

Blue : No route arrangements in the next two weeks.

In view of the impact of the new coronavirus on multiple routes, THE Alliance announced the adjustment measures for the three months of July, August and September.

PS5 will continue to be suspended from 27 to 31 weeks

The EC3 route will temporarily merge with EC1 in July and may change.

Among the top 12 liner companies, Mediterranean Shipping ranks first in terms of idle capacity. There are nearly 500,000 TEUs in idle, and a total of about 100,000 TEUs of ships have not been out in the next two weeks.

Transport arrangements from the perspective of the breakdown of shipping companies, the two largest shipping companies in the world, Maersk and MSC of the 2M Alliance, have idled the most capacity. From the standpoint of idle capacity, The Korean shipping company HMM has the highest, and one third of the capacity is not started.

THE Alliance will continue to pay close attention to the latest market conditions during the New Corona Virus pandemic and provide updates on any necessary service changes. Once the market conditions improve, the affected services are expected to resume normal operations.

Benefiting from the shipping company’s capacity control and short-term recovery in demand, freight rates on routes such as the US West Coast and the East Coast increased slightly, while European routes declined slightly.

As of the end of May 2020, the average monthly freight rates of the Ningbo-US West and East routes were USD1733/FEU and USD2601/FEU, up 6.9% and 8.5% from April. The Shipping liner has brewed plans to increase rate in the US West, East and other routes in early June. It is expected that the release of this wave of demand and support for freight rates will continue until the middle and late June.

From Shanghai export to the US West Coast basic port on June 5 was US$2132/FEU, compared with the two weeks ago on May 22 The freight rate has risen by 27%, which is a substantial increase of 48.2% compared with the same period last year.

This freight rate is also the highest since January 2019. The freight rate (sea freight and maritime surcharge) From Shanghai export to the US East Basic Port is US$ 2738/FEU, May 27 and May 22 are US$ 2732/FEU and US$ 2543/FEU respectively, compared with US$2502 in the same period last year. Although the growth rate is not as good as the US West Coast market, the overall situation is stable but have increase.