The Europe-North America container trade saw a spike in volume in August as US imports of high-volume commodities increased sharply, despite economic recessions on both sides of the Atlantic.

It was the trade’s first year-over-year growth since April, when COVID-19 lockdowns in the United States and European Union brought demand to a standstill, and forwarders and carriers tell JOC.com the August volume momentum has continued through September.

Containerized US imports from Europe were up almost 11 percent in August compared with the same month last year, a stark turnaround from year-over-year declines of 6.8 percent in July and 25 percent in June, according to data from PIERS, a sister company of JOC.com within IHS Markit. Imports of the seven top commodities from Europe increased almost 4 percent year over year, with some product sectors showing sharp turnarounds in demand.

The highest growth was in the wine and spirits sector, which in August recorded a 27 percent year-over-year increase in volume. This was a dramatic improvement on the 9 percent decline in volume seen in July compared with the same month last year.

Alison Leavitt, managing director of the Wine and Spirits Shippers Association (WSSA), said volume being shipped into the US was almost at “normal” levels for this time of year, and would likely continue into the beginning of the fourth quarter.

“We expect alcoholic beverages to be a strong seller during the holiday months, despite the limitations on gatherings and restaurant-bar openings, and the space situation is manageable as long as we do not have unexpected blank sailings in the upcoming months,” Leavitt told JOC.com.

According to Sea-Intelligence Maritime Analysis, the last blank sailing announced by the carriers was in early August (week 31), although the 2M Alliance of Maersk Line and Mediterranean Shipping Co. have extended the suspension of their TA4/NEUATL4 trans-Atlantic loop through September. The service, which deploys five vessels of 5,300 TEU, was originally suspended until mid-July.

The automotive market is also on the rebound after being hit hard by the COVID-19 pandemic. PIERS data show the 12,476 TEU of vehicles and parts shipped from Europe to North America in August was down 25 percent compared with the same month last year, but it was a considerable improvement on the 49 percent decline recorded in July, and the 66 percent decrease in June.

A spokesperson for Hapag-Lloyd said demand on the trans-Atlantic has been rising since June, leading to strong utilization of its vessels, led by the automotive sector.

“There is no boom like on the trans-Pacific, but a continuous improvement of volume, which we expect to continue also in the fourth quarter,” the spokesperson said. “Especially automotive transports have recovered after decreasing in the second quarter.”

Other US imports from Europe that have rebounded in August include plastics, up 14 percent year over year after posting an 18 percent decline in July, and furniture, which was up 19 percent after a 26 percent drop in July compared with the same month last year.

However, the improvement in demand has not been matched by corresponding increases in freight rates on the westbound trans-Atlantic, as it has in the trans-Pacific trade. According to data from online rate marketplace Xeneta, the average levels of both short- and long-term Europe–US rates through August and September were lower than during the same months last year. A snapshot of the spot market on the Xeneta platform on Sept. 24 shows rates at $2,018 per FEU, down 9.5 percent year over year, and long-term rates at $1,855 per FEU, a drop of 6.5 percent compared with the same week last year.

Significant increases in freight all kinds (FAK) rates from Oct. 1 have been announced by some carriers on the trans-Atlantic from Europe to Canada. On the North Europe–Canada East Coast route, the FAK settings range from $3,900 to $6,700 per FEU, while Mediterranean–Canada East Coast rates range from $3,600 to $4,516 per FEU. Similar to general rate increases in the trans-Pacific, however, these FAK rates are aspirational, and it remains to be seen whether shippers will actually pay the much higher prices. 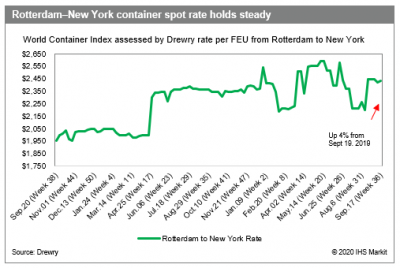 “Fortunately, the trans-Atlantic market does not suffer with the massive price swings typical in the trans-Pacific and we are able to plan together with our carriers to manage any uptick or downturns in the market,” Leavitt said.

Erik Devetak, head of product at Xeneta, said most of the capacity that had been removed from the trans-Atlantic via blank sailings during the second and third quarters has now been reinstated, but contract rate levels were growing. “It looks like there is a shift in mentality globally from shippers in accepting higher rates and that is slowly finding its way to the trans-Atlantic,” he said.

Interestingly, the Xeneta platform shows that the highest long-term rate contract was 17 percent above the average short-term rate level, a peculiarity that was also picked up by BIMCO analysis.

Peter Sand, chief shipping analyst for BIMCO, told JOC.com that some long-term contract rates were actually higher than the spot rates as the spot market remained weak on the headhaul westbound trans-Atlantic trade.

“Capacity management is either not applied on this trade lane, or not working anywhere near as well as on most other trade lanes,” he said. “For Q4, BIMCO expects more of the same. Europe to North America is a very steady trade with no real peak season. Obviously, the trans-Atlantic is not a focus area for the carriers.”