Still, retailers’ and consumers’ warm embrace of ecommerce has been a silver lining. Retail ecommerce sales will grow 36.7% this year to $84.95 billion, nearly three times more than the 12.5% growth we estimated in our Q4 2019 forecast—and almost double the 19.4% growth in our May 2020 update.

This impressive growth will also make Latin America the fastest-growing regional retail ecommerce market for the first time since we began covering the region in 2009. It is also the first time since 2010 that Asia-Pacific will no longer hold its historical No. 1 position.

This growth partly stems from the fact that two of the region’s economic powerhouses—Buenos Aires, Argentina, and São Paulo, Brazil—have been under some of the longest government-mandated lockdowns worldwide since March 20 and March 22, respectively.

Although President Alberto Fernández of Argentina ended Buenos Aires’s lockdown measures in early November, the city moved into “intelligent” social distancing through the end of the month, which encouraged people to make smart decisions when deciding with whom to interact. Meanwhile, Gov. João Doria of São Paulo extended lockdown measures until December 16 following the now more than 44,000 reported deaths from COVID-19.

This further drove the consumer shift toward ecommerce. Despite its precarious macroeconomic environment, Argentina will be the fastest-growing retail ecommerce market worldwide, at 79.0%, among the 32 countries we track. 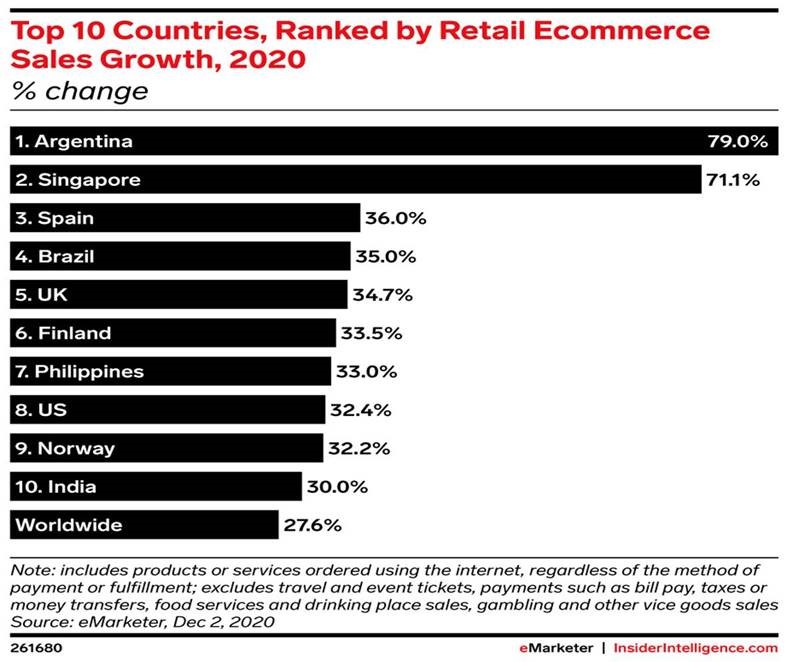