Sleipnir the largest crane vessel in the world 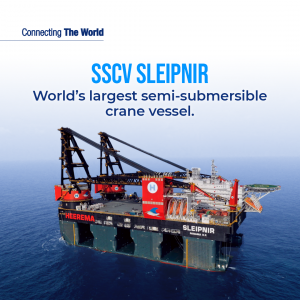 The world’s largest and strongest crane vessel owned by Heerema, called the Sleipnir, is designed to work on large offshore projects, such as installing and removing drilling equipment, deep-sea foundations, moorings, and other offshore structures such as wind turbines.

Sleipnir is also the world’s first crane vessel with dual-fuel engines capable of running on traditional MGO and LNG.

Heerema says the ship’s Dynamic Positioning system performed even better than expected, keeping Sleipnir within the footprint of just 12 by 12 inches during work.